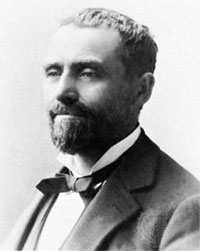 John Peter Altgeld was born on December 30, 1847 in the small German village of Nieder Selters. His father was a struggling farmer and a wagon maker, so to improve their life, his family left Germany for Newville, Ohio when John was only three months old. The Altgelds continued to be farmers. During this time, the Altgelds had eight more children, making John the eldest of nine, although three would die during infancy.

John spent most of his childhood working on his family’s farm. In school John was an average student, and at age 12 he stopped attending school at the request of his father. John did not mind this entirely as he was picked on frequently by other children for being a foreigner.

When the Civil War broke out, John wanted to enlist, but he was too young at the time. When he turned 16, however, his father allowed him to enlist, and on May 12, 1864 he joined the 48th regiment of the Ohio National Guard. This company eventually became the 63rd Ohio Volunteer Infantry.

Shortly after Altgeld was done with his training, the 63rd went to Virginia under the command of General Benjamin Butler. In the battle at Bermuda Hundred on June 12, 1864 General Grant began his assault on General Lee’s northern army. The Ohio 63rd could have been sent directly into the heat of the battle; however, Butler assigned the 63rd to patrol the safe side of the James River. At this time, Altgeld took part in some mild skirmishes along the river. Although Altgeld was said to have been quite brave during this battle, he personally stated that his war experience was “nothing of consequence.”

Shortly after, Altgeld contracted malaria and spent several weeks in a hospital. Although he recovered, his bout with malaria gave him health problems the rest of his life. Instead of going home, he insisted on rejoining the 63rd, but that September the regiment was released from service. In total casualties, the 63rd lost three times more men to disease than combat.

After the war, Altgeld attended high school against the will of his father, and although he was never exceedingly successful academically, he became a school teacher. Altgeld received a teaching position in Savanah, Missouri where he impressed a local judge with his hard work, and was offered a position as a law clerk in April of 1871. In 1872 he was appointed City Attorney, although he had been admitted to the bar only less then a year earlier.

In 1875, Altgeld moved to Chicago, a decision he initially regretted. In 1877 he went back to Ohio and married his hometown sweetheart Emily Ford. In Chicago, he initially had troubles establishing a successful law practice. Soon, however, Altgeld began to invest in real estate for which he proved to have a knack, and by 1879, was a wealthy man with an estimated worth of $1,000,000.

Altgeld became actively involved in the Democratic party in Chicago as well, and in 1884 was the Democratic candidate for the Illinois legislature, although he was defeated in the general election. Then in 1886 he was elected to the Superior Court of Cook County where he served until 1891.

In January of 1890, Altgeld purchased one of the most expensive blocks in downtown Chicago, then known as the “unity block” (currently 127 North Dearborn Street). Altgeld had intentions of building several skyscrapers on the block; however, due to his haste, the first Unity Building framework needed to be re-built, costing Altgeld $100,000. He then borrowed almost $400,000 from John R. Walsh who was president of the Chicago National Bank. Altgeld was unable to make the payments, and was forced to mortgage or sell most of his property. Later Altgeld was offered a bribe from railway tycoon Charles Yerkes in exchange for an extension of Yerkes’ railway monopoly. Although the bribe would have restored Altgeld’s fortune, he declined Yerkes’ offer.

Despite his losses, he was elected as the Democratic candidate for Governor in the 1892 election, and on December 7th became the first foreign-born man elected Governor of Illinois. Although he was personally a man of business, as a governor he recognized problems with both women and child labor laws and also opposed the violent use of police against labor strikes

On May 4, 1886 a rally was held at Haymarket to protest the brutality of police toward labor strikers. Although the gathering was initially peaceful, around 10:00 PM the police advanced on the crowd. At this point someone in the crowd threw a bomb at the advancing police, and the police opened fire. Seven police officers were killed and almost 70 wounded. The number of civilians injured or killed, however, is unknown as many of the injured or dead were either privately cared for or hidden in order to avoid public identification. Eight key members of the protest were brought to trial and convicted for their involvement. One committed suicide and four were executed. Altgeld believed, however, that much of the evidence used to convict them was “pure fabrication,” and on June 26, 1893 he pardoned the remaining three men amid enormous controversy.

Another staple of his administration, was Altgeld’s involvement in the Pullman Strike. On May 11, 1894 workers from the Pullman Corporation began to protest wage cuts. The strike was eventually joined by the American Railway Union, supposedly out of “class sympathy.” The strike escalated and soon railways from Chicago to the Pacific coast were shut down. This had a negative consequence for the whole country, and riots began to take place. As a result President Cleveland sent federal troops into Chicago to put down the strikes despite the protests of Govenor Altgeld. Altgeld, was nationally ostracized for his stance on this issue. Altgeld never recovered politically from this and was voted out of office in 1896. He attempted politics one last time in 1899 when he ran for Mayor of Chicago as an independent candidate, but he was defeated in the general election.

Although he was not known for his looks, Altgeld was a fantastic orator. On the day of his death he had been scheduled to give a speech in Joliette, IL to raise awareness regarding the Boer women and children in South Africa. John Peter Altgeld died March 12, 1902 from a cerebral hemorrhage.