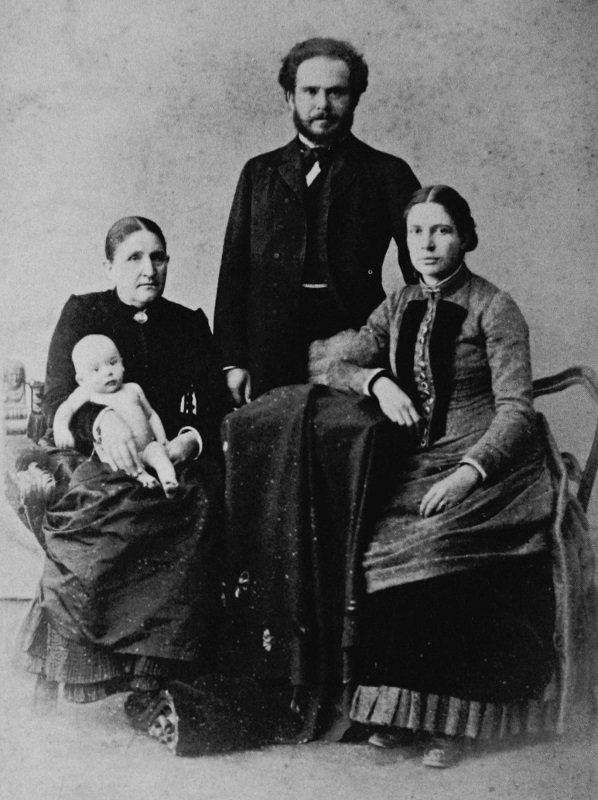 Florence Kelley and her husband, Lazare Wischnewetsky, with their son, Nicholas, and Lazare’s mother, 1885. From Sklar, Katherine Notes of Sixty Years: The Autobiography of Florence Kelley, p. 60

When Florence Kelley arrived in Chicago, as she later wrote, ‘on a snowy morning between Christmas 1891 and New Year’s 1892’ one of her first destinations was Hull House. Her later description of the seemingly enchanted, idyllic journey through the streets of Chicago to get to Hull House is classic:

“On a snowy morning between Christmas 1891 and New Year’s 1892, I arrived at Hull House, Chicago, a little before breakfast time, and found there Henry Standing Bear, a Kickapoo Indian, waiting for the front door to be opened. It was Miss Addams who opened it, holding on her left arm a singularly unattractive, fat, pudgy baby belonging to the cook, who was behind hand with the breakfast. Miss Addams was a little hindered in her movement by a super-energetic kindergarten child, left by its mother while she went to a sweatshop for a bundle of cloaks to be finished.” [read more]

Actually, the Florence Kelley who came to Hull House was at that moment Florence Kelley Wischnewetzky, with three children under six, whom she had left at the Women’s Building, the headquarters of the Women’s Christian Temperance Union. She was fleeing New York City to escape an abusive husband, from whom she would not be divorced until June of 1900. From the moment of her arrival in Chicago, however, she was no longer Mrs. Wischnewetzy, but Mrs. Florence Kelley, although legally she did not have the right to call herself by her unmarried name because she was not divorced.

Coming to Hull House was a new beginning, a new identity, although when Florence Kelley came to Chicago she was not an unknown person in Chicago. She was known as a writer, an activist, a reformer, as a translator of Engels, and as someone who had devoted much of her life to improving the living and working conditions for women and children.

Hull House, a social settlement at 335 Halsted Street, was a new enterprise, founded by Jane Addams and her friend and collaborator Ellen Gates Starr, only open since September 18, 1889. Jane Addams was later to be awarded the Nobel Peace Prize, just before Florence Kelley’s own death in 1932.

The decade when Florence Kelley was a resident of Hull House was a time of economic hope and depression, the period of the World’s Columbian Exposition (The White City) which brought millions of visitors to Chicago, and a time when, in the brutal winter of 1892, 100,000 homeless men slept in the streets and on the marble floors of the courthouse, city hall, and in police stations which, at that time, served, when necessary, as homeless shelters for sleeping only. [read more]

For Florence Kelley, Jane Addams, Henry Demarest Lloyd and many others, Hull House was the headquarters for ambitious plans to clean up and close the sweatshops, provide universal primary education, and teach literacy in English to the cascades of recent immigrants from Russia, Sweden, Italy, Ireland, and Bohemia who came to Chicago to work and begin a new life.

Their method of accomplishing these improvements in the lives of others was through the law, by enforcing existing laws, by persuading the state legislature and the City Council to enact new laws and regulations, and by carrying out mandates of the United States Congress. The momentum for these reform efforts was national and statewide, and the role of individuals, such as Florence Kelley and Jane Addams and Henry Demarest Lloyd, was critical. Yet none of them could have accomplished what they did without the times being what they were and the city being at a certain point in its own economic and political development. It was the best of times and the worst of times in Chicago, and what happened here then came about because particular individuals, men and women with their own backgrounds and personalities and histories, were in the middle of a booming, banging, growing city, Chicago, at a time when events and circumstances seemed to contrive to make change possible.

Jane Addams and Ellen Starr had purposely founded Hull House in the middle of the worst slum, the home of the most crowded sweatshops and tenements, in the city. Their inspiration was their own college education and Toynbee Hall in London, which applied Christian Socialism to the needs of the London poor. Their goal was to start a movement of social service, without the component of religion, and they did. Hull House may not have been the first social settlement house, or even the longest lasting, but it was the beginning of organized social service and over time it came to stand for the principles behind social work and social settlements. In part that is because its residents and associates wrote about it, talked about what they wanted to accomplish there, and were active in local and state politics and in the law.

When Florence Kelley came to Chicago, she was already a highly educated person. Her father, William Darrah Kelley, a self made man whose own father had died when he was two years old, had been a Congressman for thirty five years, a Judge and a States’ Attorney in Philadelphia, a writer, a reader, and always active in reform politics. He married a woman from a family of distinguished and educated Quakers who had been active, and vociferous as he had been, in the abolition movement, often at great personal and bodily risk to themselves.

Florence Kelley’s father, her mother, and her aunts, and their society in Philadelphia were her real education until she went to Cornell University to graduate among the one of the first classes of women in 1882. Her senior thesis there was written on the subject of laws regarding child labor.

After graduating from Cornell University, Florence Kelley briefly taught in Philadelphia. She then took graduate education in economics and the social sciences at the University of Zurich, then the only university in Europe to admit women for graduate study, after being turned away from the University of Pennsylvania and Oxford University. In Chicago she studied law and earned a law degree from Northwestern University School of Law and was admitted to the Illinois Bar in July of 1895.

By the time Florence Kelley came to Chicago, she was already an accomplished public speaker, fund raiser, political organizer, writer, a translator of the prominent European socialist Frederich Engels, fluent in five languages, and skilled and sophisticated about people, society and the law. For Florence Kelley, for Henry Demarest Lloyd, and for John Peter Altgeld, the Governor of Illinois who appointed Florence Kelley the first Factory Inspector, the law was the institution and the method which accommodated and accomplished social and political ends. Jane Addams was not a lawyer, but she was equally accomplished at raising money, being a leader of men and women, and establishing a social setting in which people could do their work.

And their work was directed at changing the living and working conditions for people who worked and lived in the sweatshops and tenements, in their neighborhood, the Nineteenth Ward - where 44,380 people lived in a warren of three and four storey buildings – and in Chicago, and eventually all of Illinois, and, they hoped, the entire United States. It was there that Hull House Maps and Papers would be written. It was from there that the first Factory Inspector would enforce the law. And that was where a myriad of other political, legal, social and educational projects would take root: projects to contain the smallpox epidemic and fire the Chicago Health Commissioner; efforts to have schools built so that children could get off the streets and learn to read and write; the building of baths so that people without water, especially the Russian Jewish women, could clean themselves; the picking up of garbage and the displacement of the Alderman who hired the collectors who reneged on their contracts to take away the rotting piles of garbage from the Nineteenth Ward, and many many other projects of improvement and health.