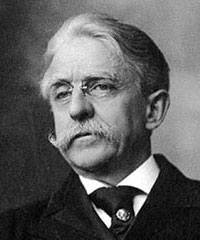 When Florence Kelley arrived in Chicago on that snowy December of 1891, with three children, Nicholas, 6, Margaret, 4, and John Brown, 2, in tow, she went first to the Women’s Temple of the Women’s Christian Temperance Union, where there was a nursery. Within a few days she had gone to Hull House, the Settlement, where she met Jane Addams. For the rest of her time in Chicago Hull House would be the center of her public and reform activities, with its residents and friends playing important roles.

Soon after her arrival in Chicago, Jane Addams introduced Florence Kelley to Henry Demarest Lloyd and his wife, Jesse Bross Lloyd. The Lloyds promptly and generously offered to take the children into their family and home, a rambling country house in Winnetka. Soon after the children’s encampment at Wayside, their nursemaid arrived on the train from New York with a trunk full of clothes and toys. And so the children stayed with the Lloyds in Winnetka, on and off, for the next several years. The oldest child, Nicholas, often went for summer holidays with the Lloyds in Rhode Island.

Henry Demarest Lloyd was a happily married man. He married the boss’s daughter when he was working at The Chicago Tribune, but not because she was the boss’s daughter. Jesse Bross was a passionate, independent woman of the new sort, college educated, literary, well read, a leader, someone who broke down barriers. When her father, a not insubstantial political figure in his own right, wanted her to go East to do the expected thing for young women, she insisted upon staying in Chicago to help with the relief work after the Chicago Fire. They were married in a small ceremony at the Bross home on Christmas in 1873.

When Henry Demarest Lloyd came to Chicago, he was a recent graduate of Columbia University, a lawyer, a poet, and he took the town by storm with his brilliance, his erudition, and his passion for justice. Before long he was the literary editor and then the very well respected financial editor of The Chicago Tribune.

Wayside, the family home in Winnetka, an hour’s streetcar ride away from downtown Chicago, where the Kelley children were welcomed soon after their arrival, was a place imbued with the family’s high spirited brotherhood, helpfulness, and joy. Regularly a dozen to thirty people dined at the family table: white and black, college presidents and seamstresses, union organizers and Hull House leaders. It was there that Florence Kelley met John Peter Altgeld, who as Governor first offered the job of Factory Inspector to Henry Demarest Lloyd who, in turn, suggested Florence Kelley.

Henry Demarest Lloyd’s writings and philosophy were well known and certainly known to Florence Kelley before she arrived in Chicago. Jesse Bross Lloyd regarded her philosopher husband’s causes and work as the center of their life. Their home created at atmosphere of distinction and charm which was said to be unequaled except at Hull House, where Henry Demarest Lloyd was a long time supporter and frequently dined when in town.

Ellen Gates Starr commented that she had never seen a husband and wife who were so mutually worthy of one another. Jesse Bross Lloyd arranged their home so that he always worked without disturbance from their numerous guests, and his disciplined and protected home environment made possible a committed and conscience driven public life. His health was often put at risk when, for example, while writing about the Spring Hill Mine lockout, he lived for weeks and months among the miners, chronicling their desperation and deprivation, and then traveled to Washington and elsewhere to advocate for their cause. His special skill was in marshaling public and private support by writing on subjects such as the political corruption and inhumane conditions at the Cook County Insane Asylum.

Like Florence Kelley, his pen, his magnetic personality, his rhetorical skills and passion for justice, his shining intelligence, and his personal charm were powerful weapons in the public arena. His handsome face, slender neat figure, his zeal and confidence, all made him attractive and a formidable opponent.

Hundreds of people came to listen to him at his well advertised public speeches, and were moved to action. This ability to move people, which Florence Kelley shared, is not, perhaps, reflected in his surviving written work which often brings the news of the specifics of long forgotten causes. His particular target was the greed and hyper-individualism of the super-rich. He attacked the gospel of an ethics-free and unregulated competition which sanctioned the distribution of wealth to the few and poverty to the many, a situation the churches and philanthropies signed on to in exchange for a pittance of charity.

His health was precarious – he suffered from lifelong insomnia and other ailments – especially after a breakdown following the execution of the four Haymarket defendants. On the night before the executions, Henry Demarest Lloyd personally petitioned the Governor not to carry out the death sentences. Clemency petitions had been signed by thousands of supporters, including some of the most influential of the legal community in Chicago, and thousands from abroad. Henry Demarest Lloyd personally delivered the message of commutation to the cells of the two who were spared the night before the hangings.

Later his public criticism of the trial court judge in Haymarket led to his being socially ostracized by the Chicago elite, and eventually, to Joseph Medill and his father in law first maneuvering him out of his position at The Chicago Tribune and then his father in law disinheriting his own daughter. Henry Demarest Lloyd’s wit and intelligence were turned on monopolistic greed and political corruption, with the evils of the Robber Barons and Big Business prominently criticized as he championed the powerless and exploited and envisioned a new order based upon social justice, the general welfare, and principles of Christianity.

His work was widely published and respected at home and broad, especially among the large and articulate reform minded community in Great Britain. He supported his causes and himself, with the addition of the contributions from his wife’s inheritance from her mother, by writing and speaking, as did Jane Addams and Florence Kelley. In response to one of his better known essays, John Peter Altgeld, when he was a judge, wrote to Henry Demarest Lloyd that he would have preferred to have published one such article than to holding any public office, because the essay would benefit humanity more than a lifetime of public office.

Championing the rights of labor became for Henry Demarest Lloyd the practical application of humanitarian and democratic ethics. The pseudoscience of the free market created, he believed, the fiction of a free contract and the false gospel of competition. He toured the tenements and saw children living under conditions so depressing he sat down on the curb and wept, and then devoted his purse, his pen, and his voice on behalf of the helpless children whom he found to be the most cruelly exploited workers.

Henry Demarest Lloyd did not start out his career as a journalist and writer as a supporter of Labor and the nascent unions. He started investigating the monopolies when he came to the Chicago Tribune in 1884. His research into the financial ownership of the railroads and their ties to Standard Oil and other companies, as well as the ongoing drama of the streetcar franchises in Chicago and elsewhere, and the corruption in city and state government, put him in conflict with the owners and publishers of The Chicago Tribune, Joseph Medill and his father in law, William Bross. Lloyd’s support of the Haymarket defendants, and his criticism of Judge Gary, did not make him popular among the Chicago elite, nor did his exposure of fraud and stock manipulations by financiers.

Like Florence Kelley, Lloyd considered his work to be the study of economics, although he refused to join the American Economic Association because he thought they were too close to business and the monopolies.