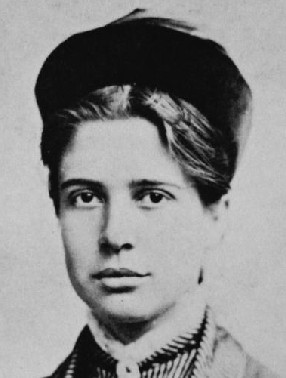 When Florence Kelley was settled at Hull House, after the habeas corpus hearings in March of 1892, when custody of her children had been awarded to her by the court and the children were settled temporarily in Winnetka, she needed to find paid employment. Dues were not high at Hull House, ($20 per month for room and board) but there was a charge, and Florence Kelley was determined to pay her own way.

Initially Jane Addams suggested that Florence Kelley start an employment office within Hull House for young women. That enterprise soon folded for lack of interest and the unavailability of jobs, although it did get her a tiny office within Hull House. What Florence Kelley did prior to being appointed Factory Inspector was stitch together a series of part time jobs, all of which, were related to her lifelong interest in ameliorating conditions for working children and women. All of these jobs were also excellent preparation for becoming the first Factory Inspector in Illinois in July of 1893.

Florence Kelley enrolled for law classes at Northwestern University School of Law in March of 1892, a few months after she arrived in Chicago. The records do not show her paying the fee, however, until later in that year. Perhaps her studies were postponed until she could afford to pay the required fee. The study of law at that time consisted of attendance at lectures in the evening, and then the taking of examinations. In 1895 one of her final examinations was scheduled to take place in March when she was in Springfield waiting for the Illinois Supreme Court decision to be handed down in Ritchie v. People. She wrote to Professor John Henry Wigmore asking that she be allowed take her examination later because business required her to be in Springfield when the examination was scheduled.

Florence Kelley began work for the State of Illinois, Bureau of Labor Statistics on May 23, 1892, even getting her own stationery to prove it. This was piece work. She was paid for each house she went into, and for each data sheet that was filled out. It was the strength and persuasiveness of the Report prepared by Florence Kelley and her colleagues which convinced the Legislature to pass the Factory Inspection Act in 1893 with unprecedented speed and with little opposition.

The political support for the factory inspection movement in Illinois, and the subsequent appointment of Florence Kelley in July of 1893 as the first Factory Inspector under the statute, did not form in a vacuum. The public push for reform was accompanied by a widespread recognition that people were living in intolerable conditions in the sweatshops and tenements. This recognition had been gathering strength in Chicago and around the country, culminating with the establishment of a national investigation commissioned by the United States House of Representatives in Washington in 1892 and the passage of the Factory Inspection Act in Illinois in the spring of 1893.

When Florence Kelley was doing her preliminary investigatory work for the Illinois Legislature, Congressman Sherman Hoar and Carroll D. Wright, to become the first United States Commissioner for Labor, were preparing the legal framework for the research which would result in the publication of The Slums of the Great Cities. Congressman Hoar traveled around the country, staying at night in the dens of sweaters, as they were called, to personally investigate the conditions in which people were living. A series of Congressional Hearings were held on the subject.

This national investigation resulted in a report published as “Investigation of the Sweating System by a Committee of the United States House of Representatives, Sherman Hoar, Chairman.” When the authorization for this research was passed by the United States Congress, Florence Kelley was appointed to collect the data for Chicago. This data collection effort took place from April of 1893 to July of 1893, prior to Florence Kelley’s appointment as Factory Inspector: ‘The entire time of four government schedule men from the 6th of April ‘till the 15th of July, 1893, was devoted to examining each house, tenement, and room in the district, and filling out tenement and family schedules.’

The statistics collected were included in the Final Report of that investigation published as the Seventh Special Report of the Commissioner of Labor, The Slums of Baltimore, Chicago New York and Philadelphia, prepared in compliance with a Joint Resolution of the Congress of the United States, approved, July 20, 1892, by Carroll D. Wright, Commissioner of Labor (Washington: GPO 1894). This Report is also referred to as The Slums of the Great Cities.

Illinois had adopted an eight hour law in 1867, but it was never enforced and had a provision which limited its general applicability. The National Labor Union called for equal pay for women in 1869 and 1870. The idea of women’s equality and equal pay for women was not novel. When he was in Congress, Florence Kelley’s father, William Darrah Kelley regularly introduced legislation granting women the vote. Nor was Florence Kelley the first female factory inspector. The City of Chicago had sent out factory inspectors prior to Florence Kelley’s arrival in Chicago.

Immediately before Florence Kelley’s arrival in Chicago a Special Report had been published, written by Mrs. Thomas Morgan, titled, “The New Slavery: Investigation into the Sweating System” (October 1891). Soon after her arrival, in May of 1892, Florence Kelley and members of the Chicago Women’s Club and the Illinois Women’s Alliance pressed the City Council for new schools to be built in the slums. Throughout Florence Kelley’s time in Chicago she and her many allies were continuously putting pressure on the City Council and other governmental bodies to improve the living and working conditions for women and children in the tenements.

Even though there was precedent in other states, when Illinois adopted the Factory Inspection Statute in 1893, it was nonetheless path breaking legislation. The Illinois legislation became more influential when enforcement under the statute began with the support of the state administration and Governor, John Peter Altgeld, and when a person, Florence Kelley, was appointed as the new Factory Inspector, a person who was trained, ready and eager to enforce the new law.